The found space was a long rectangular volume, 6-8 m wide, void of light and ventilation and completely under-utilized on the ground floor of one of central Malta’s most prominent thoroughfares.

Spanning from one street to another over a depth of 51m and serviced only by two small shafts, the high ceilings offered the only redeeming element of the space. The main challenges were clear; to create an environment which was not daunting and repetitive, and to reconnect with the outdoors despite this extreme depth and lack of natural amenities.

Right angles and curves where used to introduce a pseudo-natural balance of sharp and blunt, which would facilitate contrast and play of space from one zone to another. The two large volumes which would later be used as the boardrooms, delineated three main areas – the Café, the Workspace and the Training Hall. The three areas were further divided into zones governed by different levels of Privacy & Focus. From the Café at one end of the spectrum through to The High Table, The Desk Spaces, The Booths, The Boardrooms and finally the Training Hall at the other end.

The angles created by the two main volumes, created space for ancillary utility rooms. The kitchenette was characterized by a perpendicular angle, which was also used for the booths. The workspace circular seating was designed to be in contrast with the surrounding angular elements. The high table used the length created by boardroom and booths, and worked off parallels of these, such that it did not obstruct circulation. The clients’ request for flexibility of space fuelled the development of a folding desk; a piece of furniture which transitions from closed, to singular desk, to double desk. This flexibility concept also moved us to create a high table which could be disconnected and placed in temporary storage.

A stimulating palette was chosen over a more subtle selection, to further highlight the different materials within the space. Blue Walls, Pink Mesh, Yellow Booths and Black Boardrooms gave the whole project its signature, invigorating character. These strong contrasts achieved by a simple coat of paint also had a more utilitarian use, offering wayfinding clarity to the constantly changing userbase of co-working spaces.

Dense urbanization often gives rise to less than ideal spaces. As an exercise in interior architecture, this project highlights how previously discarded architectural shells can be transformed into functional and engaging spaces, without compromising on aesthetics. 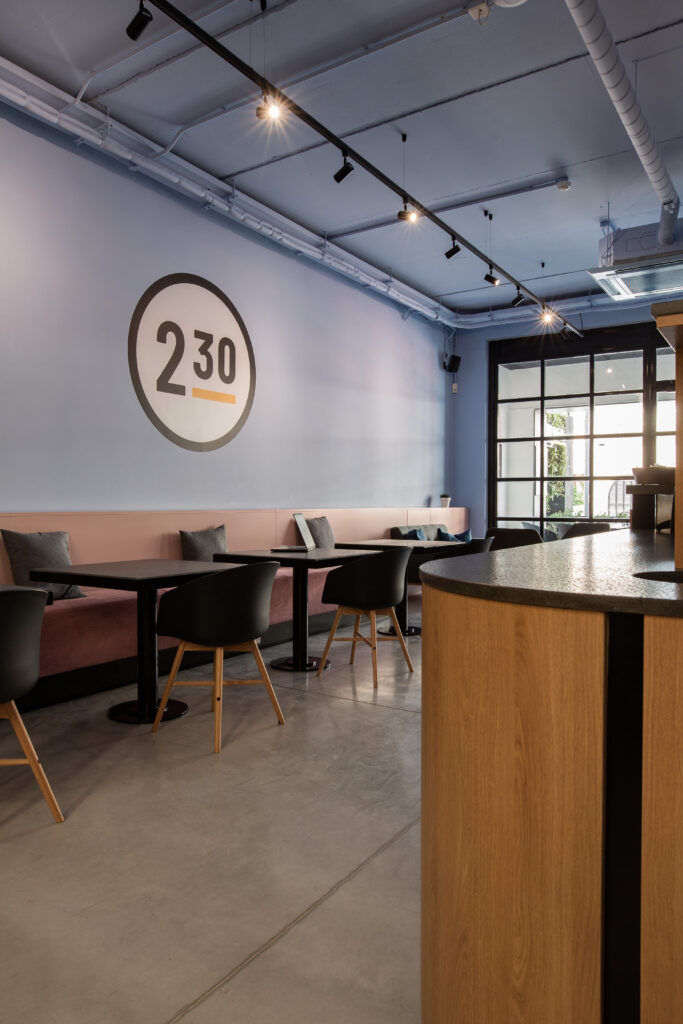 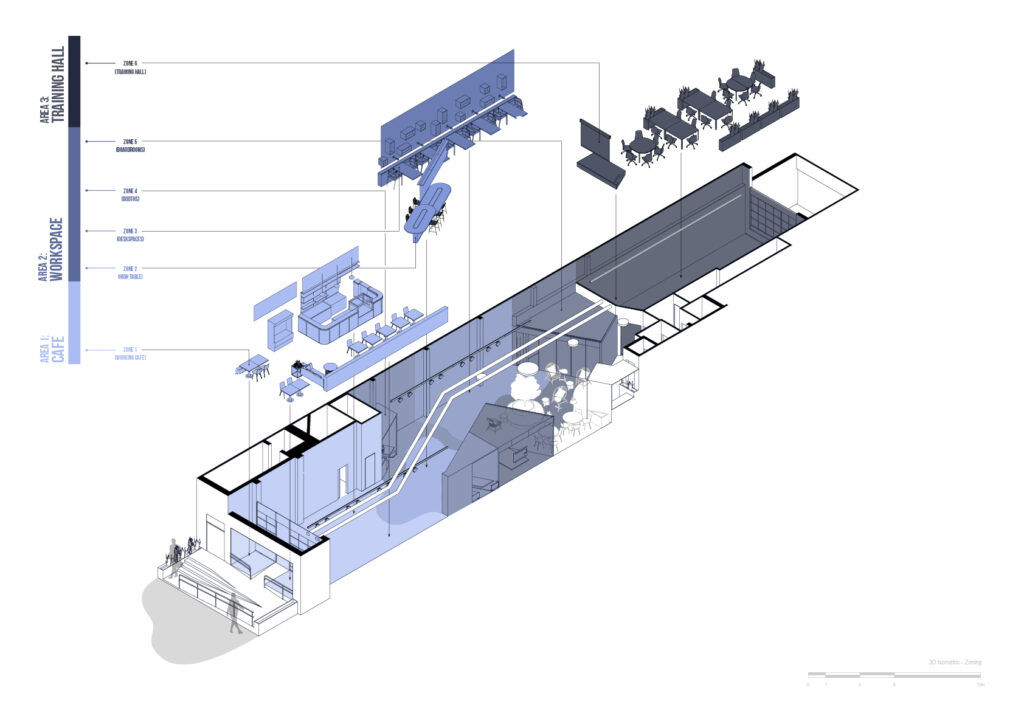 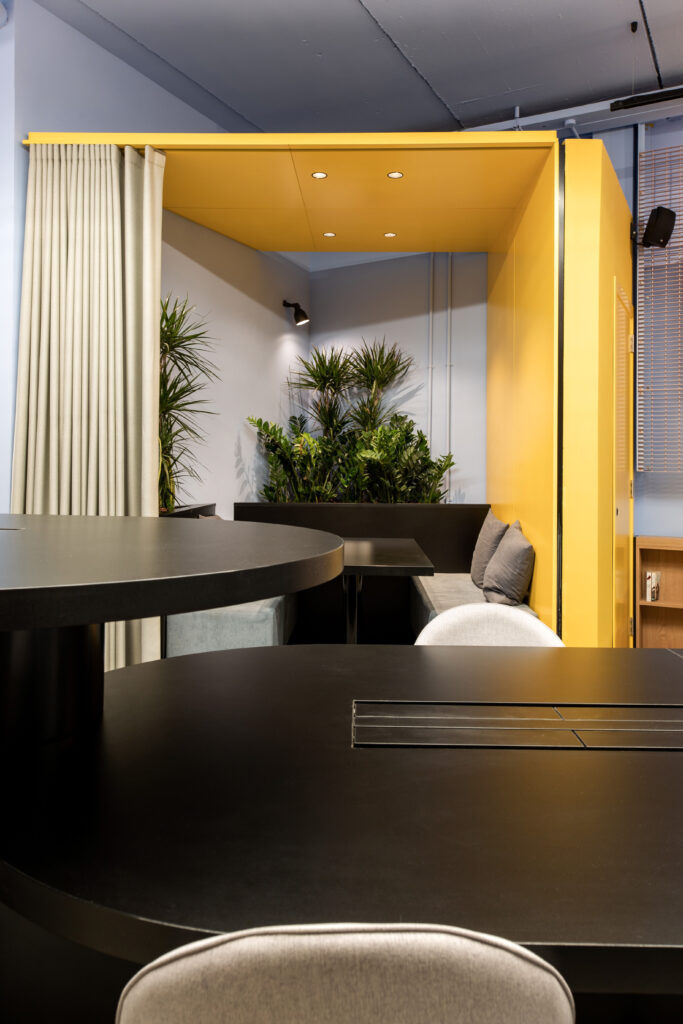 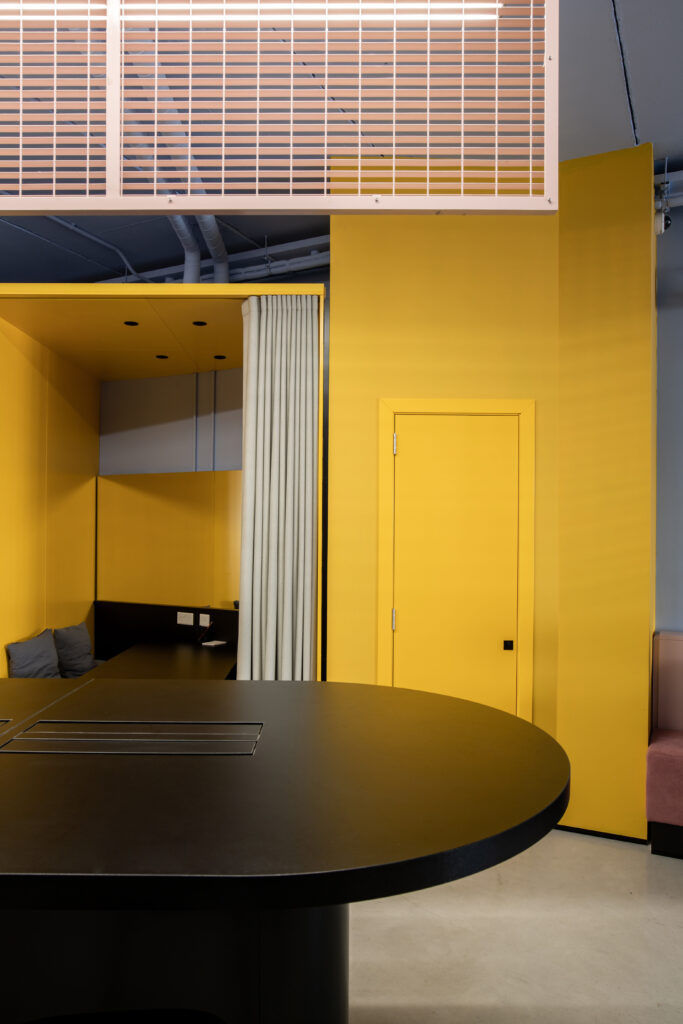 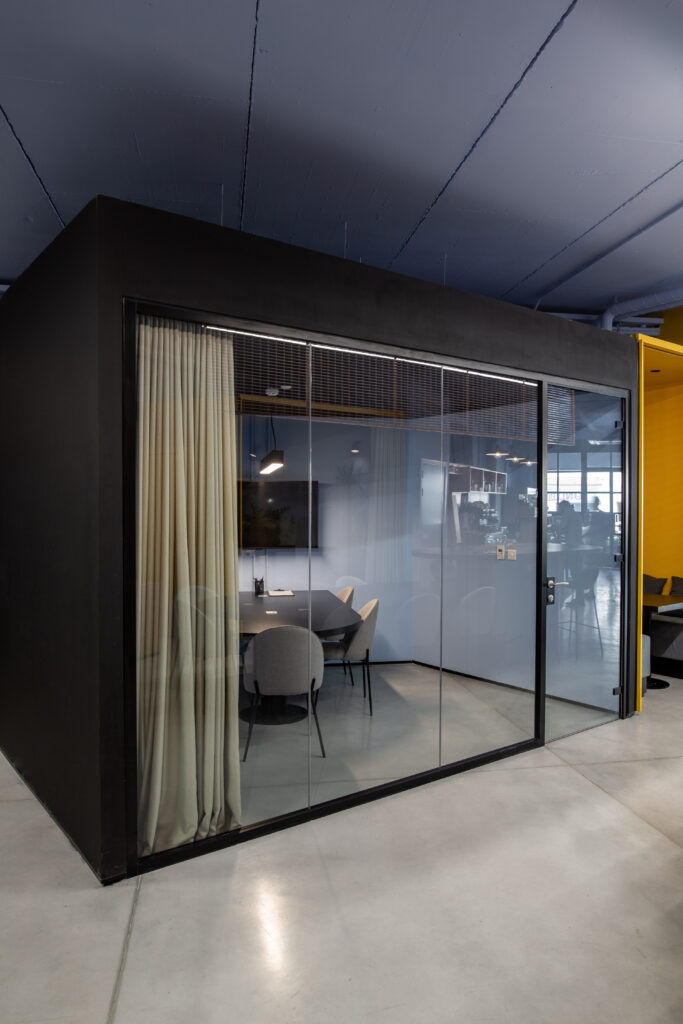 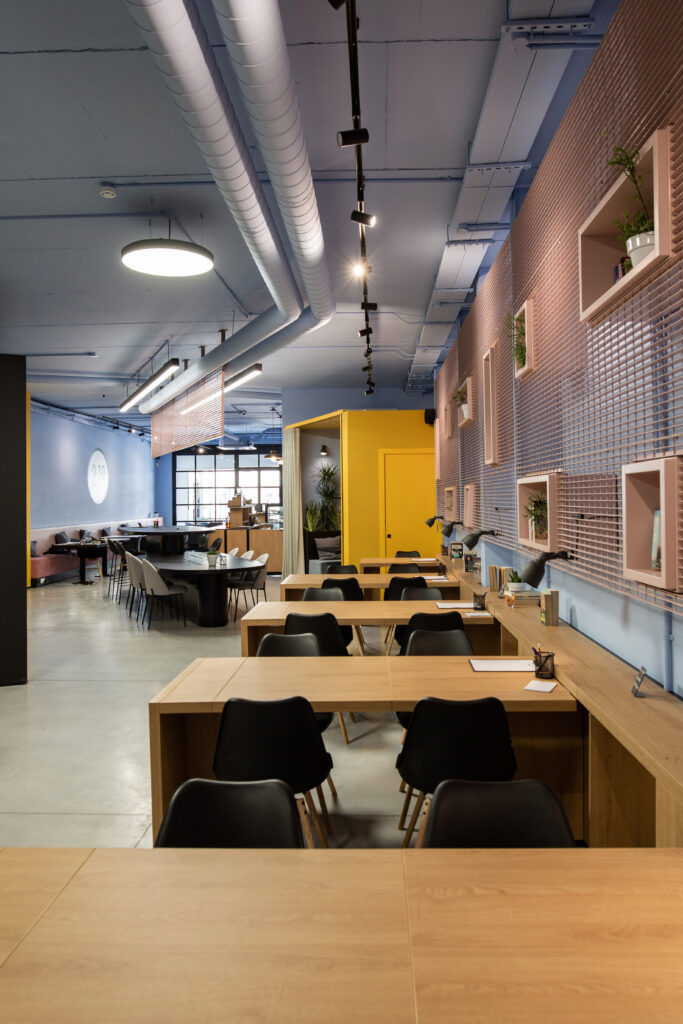 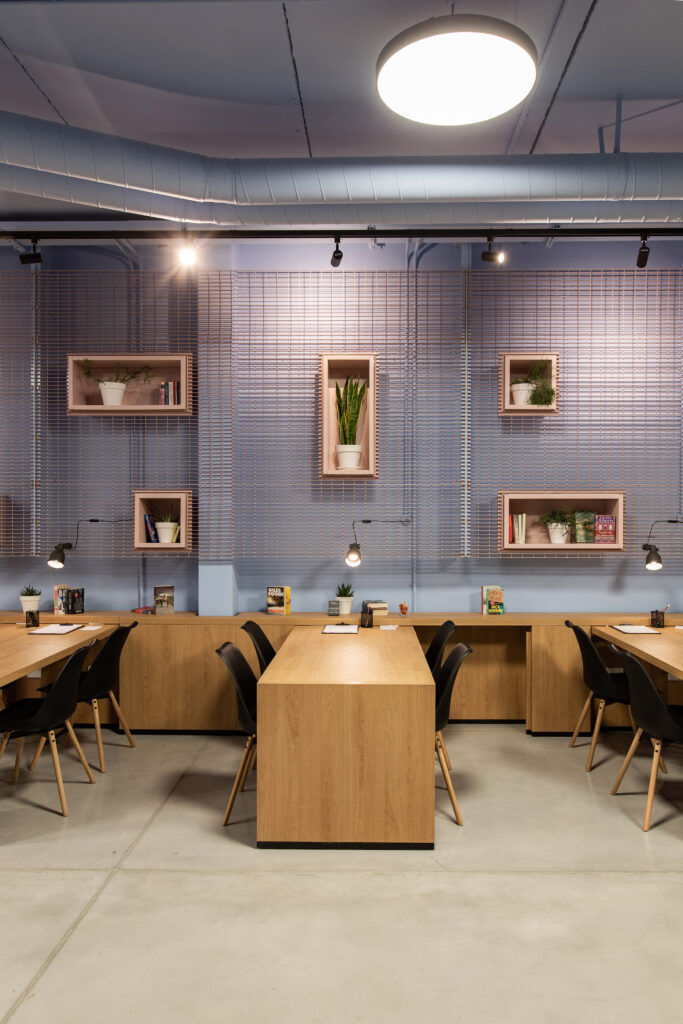 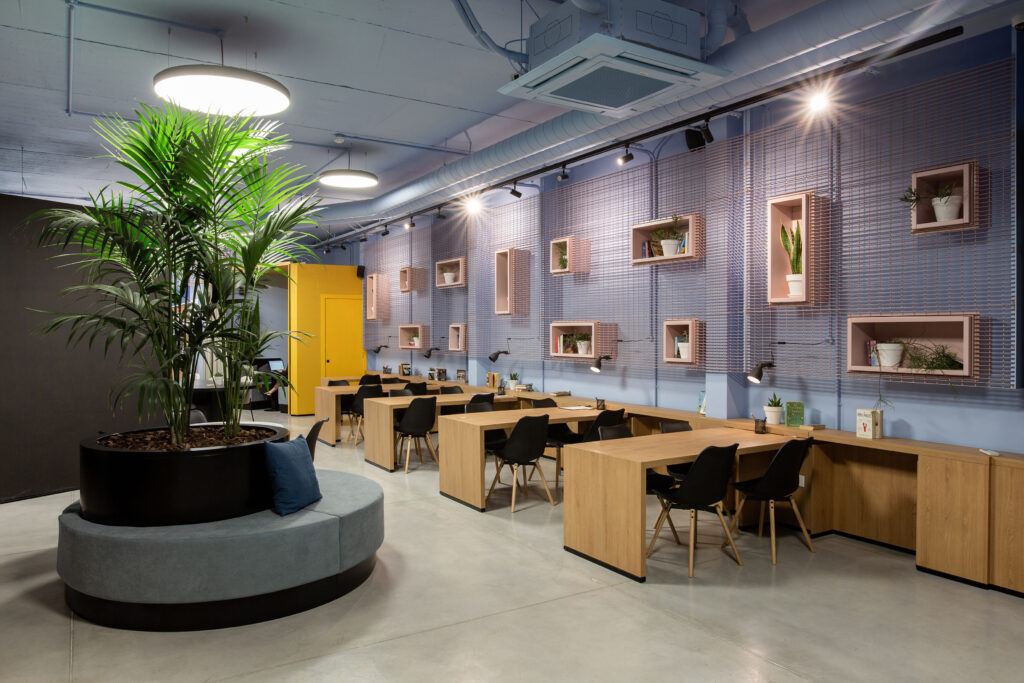